Part I of this series focused on Dryfire Practice. Now let’s focus on livefire practice, especially for those who are new to pistol shooting. To learn, maintain, and improve physical skills, we have to practice them regularly. We also need a plan for how we are going to practice. In that regard, shooting a gun is no different from learning to throw or hit a ball.

The problem many people have is that when they go to the range to practice, they have no plan and use no structure. At least a motivated police officer has the course required for periodic qualification as a structure for practice. Competitive shooters have courses of fire, either for Classification purposes or something that was appealing in a match. Few Private Citizens have either of these, which is why the most common ‘practice’ is blasting 50 holes in a silhouette at 5 yards. Shooting a bunch of holes in a silhouette gives familiarity with recoil and muzzle blast but not much else. Something further is needed to develop skill.

A very good starting point for new shooters is the NRA’s Marksmanship Qualification Program,  which is really a marksmanship development program. This is a self-paced and self-administered program that the NRA has made available for decades. There are a number of different courses of fire available within the Program. The one I recommend for those who have just purchased a pistol for personal protection is Defensive Pistol I. DPI is designed to improve skills that contribute to a successful home defense.

Defensive Pistol I includes tasks such as:

Something I really like about Defensive Pistol I and II is that the accuracy standard is 100%, not a fraction thereof. The allowable area and time limits are generous but you have to make every shot count. As I mention periodically, every bullet you fire in an urban area that doesn’t hit your target is heading for a busload of nuns and orphans being followed by a limousine full of personal injury lawyers on a conference call with the District Attorney. We have to get used to the idea that the only safe backstop for our bullets is the criminal’s body, period.

The target area specified for the NRA program is the 8 ring of the NRA D-1 (Bianchi Tombstone) or equivalent. The 8 ring of the D-1 is 12 inches in diameter. The shooter must place five shots in the 12 inch circle at 7 yards within a time limit of 15 seconds. Many shooters I talk to think this is a very simple marksmanship task. The reality is that because of the 100% standard it’s not as easy as people think. In order to meet the standard for the first level (Pro-Marksman) of the program, the task has to be done four times. Therein lies the rub. I have run over 100 people through the program and only about 10% have passed on the first attempt. What happens is that on one or two runs, one shot will not hit the 12 inch circle. Sorry, you didn’t make it.

The good news is that the four runs don’t have to be done consecutively. If you mess up a run, just shoot another until you have four that meet the standard. My experience has been that 10 percent of shooters can do it in four runs, another 40% will make it in five runs, another 40% will make it in six runs, and the final 10% need a lot of coaching to get through it.

While the Tombstone target isn’t available at all ranges, the allowance for an ‘equivalent’ means you can make a template of the 8 ring and apply it to whatever target is available. Just take your template and a marker with you to the range. I cut mine in half and then taped the halves together with duct tape so it folds and fits easily in my range bag. 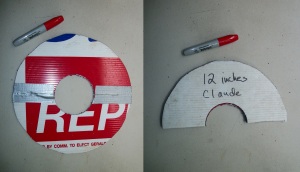 Once you get to the range, outline the template on your target and you’re ready to go. Be sure to take some kind of tape or marker with you so you can mark each run. Marking each run is how you learn to shoot well. As a general rule, I mark my targets after no more than 10 shots. When doing this program, you should mark your target after each string of fire, i.e., each five shots. 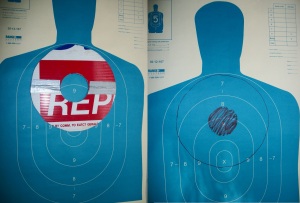 A new shooter can structure their practice sessions in many ways. What’s important is to plan what you do before you go to the range so you don’t waste your time and resources. The NRA program appeals to me because it’s already made up, it contains relevant skills, and it’s workable at most indoor ranges.

There are also awards available from the NRA for participating in the program. NRA membership is not necessary to participate. The NRA Marksmanship Qualification Program Booklet explains the entire program in detail. It is available for download from the NRA Training Division’s website.