Gunowners, whether carrying a gun or keeping a gun at home, can and do make mistakes, sometimes very serious ones. Serious Mistakes that gunowners make are things like:

I have often chastised the training community for failing to create non-traditional educational materials that can reach a broader array of gunowners. As a step toward alleviating that, I have created a new audio presentation, over one hour long, called:

It is available either as a CD or Flash Drive on my mobile friendly webstore. 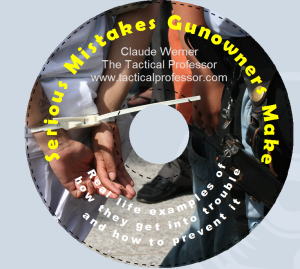 This Audio Presentation is a refined version of my Negative Outcomes with Firearms presentation at the 2015 Rangemaster Tactical Conference. My Rangemaster presentation was very well received as groundbreaking about issues that are rarely discussed openly in the gun community.

The ‘Concealed Carry Mistakes’ lists I frequently see usually revolve around simplistic issues, such as:

In contrast, the 12 tracks of Serious Mistakes cover:

The tracks explain each topic and the issue, provide real life examples of such occurrences and the consequences, and give some thoughts about how to prevent them. My object is to provoke thinking about the fact that firearms are deadly weapons and can be terribly unforgiving of carelessness, incompetence, and stupidity.

Note that I can’t possibly explain nor control every way to avoid the Serious Mistakes so I don’t assume any liability for those who listen to the recording and still end up having an issue. Life is not fair; if you want guarantees, buy a toaster.

This could be your most important purchase of the year. Making any one of the Mistakes almost inevitably leads to tragedy or significant legal expense. The price of the Presentation is miniscule in comparison.

The Audio Presentation is available either as a CD or Flash Drive on my mobile friendly webstore.

Final note: Because I want this information to be widely distributed, I am granting a limited re-distribution license to anyone who purchases the Presentation. People do it anyway but I will make it formal and encourage it.

Please be safe and encourage fellow gunowners to do the same. I hope I can make a contribution to that with this Presentation.