Making friends with other gun carriers

(second in a series)

DALE CARNEGIE’S SECRETS OF SUCCESS (nee The Golden Book) is a valuable resource for improving our relationships with other members of the gun carrying community. The hard copy I have is six pages long. I’ve kept it on my desk for over 20 years since I went through Dale Carnegie training. The book is available online as a free download.

The first part of the book is a three page section called Principles from How to Win Friends and Influence People. It covers three topics.

Each of the topics has a series of numbered bullet points that can guide our interactions with people. Here’s how we might apply those Principles in the situation of seeing someone whose way of carrying isn’t what we would ordinarily recommend.

6. Remember that a person’s name is to that person the sweetest and most important sound in any language.

7. Be a good listener. Encourage others to talk about themselves.

Questions are powerful, much more powerful than criticism, condemnation, or complaints. By starting a friendly interaction with a person and then asking kindly questions, we have the opportunity to be guides to people who are less knowledgeable than ourselves. It puts us in the position to Win Friends to our community and influence them to Success. Our people skills are the single most powerful weapon in our arsenal.

We must, indeed, all hang together or, most assuredly, we shall all hang separately.

Can we be a little less judgmental?

(First in a series)

There’s a picture of a woman carrying a pistol non-doctrinally (i.e., a lot of people are unhappy with the way she’s doing it) circulating on the Internet now. The pistol is in a holster attached to her yoga pants and despite being a small pistol, it’s pulling her pants down some on that side. I’m not going to post the picture because it’s unnecessary to my point. The picture has generated almost universal criticism, the following being typical.

The freedom to carry a gun is a great thing.

But you will never, EVER convince me that carrying a gun without training is smart decision. If you’re untrained[,] you do stupid things like this, which actually puts you and those around you in more danger than if you were unarmed.

Carry a gun. But don’t be an untrained fool about it.

At least she has a gun and her holster has a safety strap.

“Get some training” is a meme in the industry. Unfortunately, both the size and the availability of the training base are very small. This is true even if every NRA and State certified CCW instructor is included in the number. There’s also the issue in my mind of those who make statements like this but got their training from the government while in the pay of the government. That generates an ethical issue you can ponder some time.

Here’s an infographic about the availability of training to gunowners. The concept of ‘the training base’ is something that people who haven’t had to regularly conduct resource intensive training for a lot of people simply don’t understand. Once again, it’s the Tactical Professor with those pesky little numbery things again. 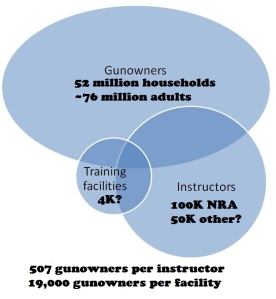 And my estimate of training facilities is based on those capable of supporting at least NRA Basic Pistol not any kind of ‘meaningful’ training for carrying a weapon. Basic Pistol or its equivalent is as far as most facilities are prepared to go, for various reasons. I wouldn’t be surprised if the number where holster oriented training is allowed is less than 1,000. The good news is that the NRA Instructor base has grown to over 120,000 so we’re probably under 500 students per instructor now. Other good news is that the NRA Training Department has created a CCW course. However, that will take years to generate any significant number of CCW Certified Instructors.

Did the person who took the picture approach the woman and offer to help her out with her knowledgebase, either personally or by referring her to someone who is a trainer?

As a community, we need to do a better job of the way we interact with beginners and novices instead of just being socially maladroit jackwagons and calling them fools.

More in the next installment.

BTW, my Concealed Carry Skills and Drills eBook would have been a nice reference to point her to or maybe even buy for her if the observer actually really cared about her welfare. Or was finger pointing, ego stroking, and shaming the real object of the exercise?

Evaluating handguns for YOU

This subject came up again today and the evaluation criteria are worth repeating.

Before you buy a gun, you should go to a range that rents guns and try different ones out to see which one is best for you.

What does “try them out” mean? How do we measure “which one is best for you?” Here is a list of worthwhile items to evaluate for you to make an informed decision about an autoloading pistol. For those who are helping a prospective purchaser, demonstrate the technique but then place the pistol in a sterile (unloaded with slide forward) condition and let them do their own evaluation without comment or coaching. You won’t be there to coach them if they need to use the pistol for real; that’s part of the evaluation.

This morning there was a murder in a church in Texas. A few seconds later, further murders were prevented by the quick action of a counter-murderer who protected the congregation. In the incident, it appears that someone tried to draw a pistol but was unsuccessful and got shot for his trouble. It is possible he was trying to get his cell phone to call for help, though. The footage is not very clear.

What was the requisite level of skill to end this situation? The shot would appear to be two aisles plus the width of a pew.

At the recommended 24 inches per person for 12 people (4 hymnal racks per pew with 3 per), that would be 24 feet for the pew plus 10 feet (two 5 foot aisles). https://www.lifeway.com/en/articles/church-architecture-rules-thumb-space-dimensions

END_OF_DOCUMENT_TOKEN_TO_BE_REPLACED

As long as a person can consistently (95% of one shot presentations) hit a target the size of two sheets of paper, stacked in landscape orientation, at four yards, they have the requisite level of marksmanship skill to dominate 99% of personal protection shooting incidents by non-sworn personnel.

That’s not a popular opinion but after studying over 5,000 Armed Citizen incidents, it’s the conclusion I’ve come to. Here is the Male torso hit zone target sheet.

There are other skills that are more important than marksmanship.

END_OF_DOCUMENT_TOKEN_TO_BE_REPLACED

Why do people carry an autoloader with an empty chamber? Because they’re concerned about having an Unintentional Discharge.

One of the comments about the incident on Facebook sums up many people’s feelings about it.

Which is more likely to save your life? Carrying an autoloader with the chamber empty or carrying a revolver ready to go? Active Self Protection provides us with some food for thought.

A Stark Reminder to Keep Your Defensive Firearm Chambered

Another Reminder to Carry Chamber Full

END_OF_DOCUMENT_TOKEN_TO_BE_REPLACED

My Patreon page is live

By tacticalprofessor on October 30, 2019

I’ve created a Patreon page and it’s now live. My plan is to create at least four posts monthly about Strategies, Tactics, and Options for Personal Protection.

I’ll still be posting a few short articles here monthly but the Patreon page will allow me to do some things I wasn’t able to before.

My first article is an evaluation of the H&K VP9SK pistol. My object is to create a more rigorous and standardized evaluation process than I generally see pistols subjected to. I will not be accepting any compensation for the hardware reviews I do. Each month I’ll be reviewing one handgun with an emphasis on subcompact and compact guns because I think those are the real concealed carry pistols.

There’s also a printable trifold brochure that describes the shooting tests I plan to use. It’s a good reference guide for anyone who wants to use it. 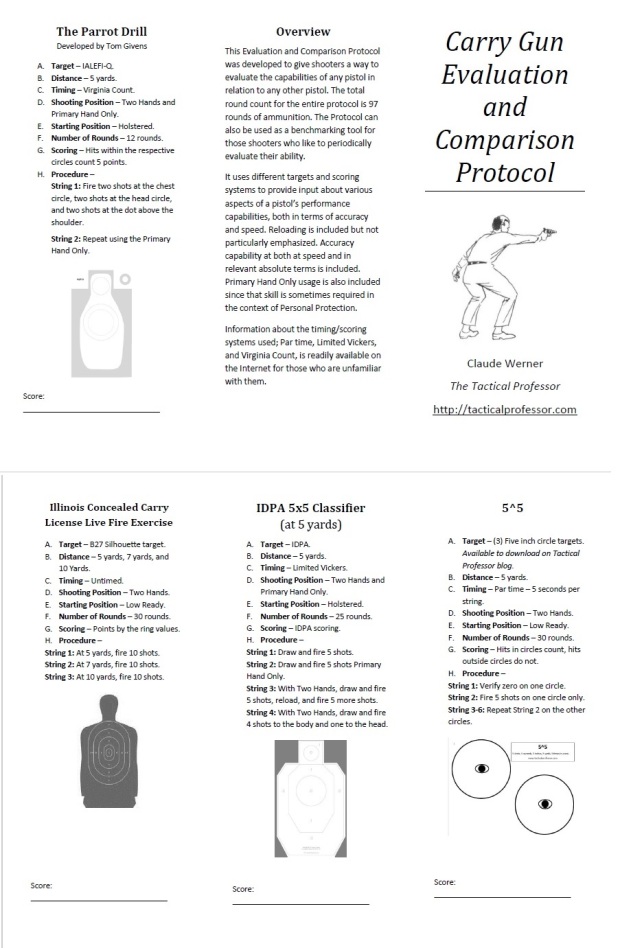 I hope you’ll subscribe to my Patreon page. I guarantee it will have value for you.

When I posted the story on my Tactical Professor Facebook page as a Negative Outcome, the following question came up.

Which reminds me: this question is probably been addressed here before but for those of us who haven’t caught it are there any vehicle storage lock boxes that have good non shitty locks that we can buy on Amazon or a brick and mortar store?

I use a lockbox that I bought at Academy Sports for 10 bucks. Any defense can be defeated. Just as in the military, defense in depth is how we prevent a defense from being easily defeated. By using multiple barriers, we encourage a thief to move on before he gets our gun. It’s the opposite of leaving a gun in the door pocket of an unlocked car left outside at night. Here’s how I do it:

1. Think ‘be discreet.’ Visually inspect the area to see who is around.

2. Have your pistol box in the trunk, already secured by its cable to the hinge of the trunk lid. If your vehicle doesn’t have a trunk, place the box in some spot that is accessible to you and out of sight of casual passers-by and has a solid attachment point for the cable.

4. Quickly palm your pistol and put your hand with the pistol into the trunk. This is where having a small pistol really helps.

5. Place pistol and any other weapons into the lockbox.

7. If your holster doesn’t fit in the box, place it near the box.

For years, I used a box with a combination lock but I’ve come to the conclusion that, for me, a key lock was faster and more convenient. The key is permanently on my keyring. I’m good at maintaining possession of my keys so I’m not concerned about not having the key to the box. 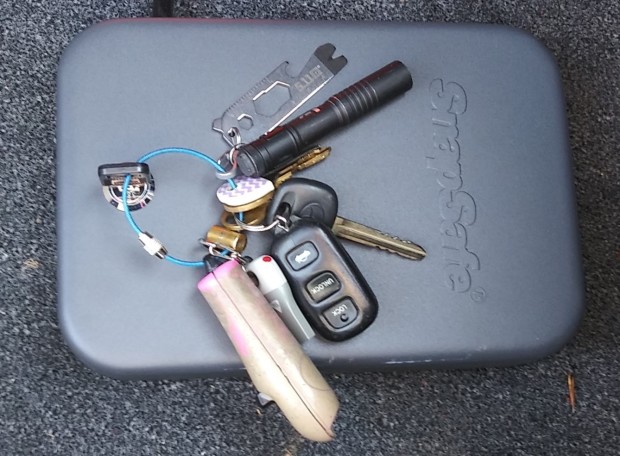 I only leave my revolver in the car when I have a good reason to; going into my home at night is not a good reason. Going into non-permissive environments or perhaps to the doctor are good reasons.

My thanks to the gentleman who asked about the topic. That was a good suggestion for a blog post. He wins free copies of Serious Mistakes Gunowners Make and Concealed Carry Skills and Drills.

My latest Ballistic Radio interview is up on the BR website.

What I like to do is to think about what works for normal people in their daily lives.

Because let’s face it, you and I and the rest of the training industry are not normal people.

This could go into three different categories of my Negative Outcomes database; ‘Poor Judgement,’ ‘Unjustified Shootings,’ and ‘POlice Involvement.’ For now, it gets filed in Poor Judgement.

This is a Serious Mistake and a clear violation of Rule #4 “Know your target and what is beyond and around it.” ‘Target’ includes the target’s backstop.