My only question is whether you might have an alternate suggestion for target set up comparable to the one in this post and the one before. I shoot at two restrictive ranges without the ability to shoot targets spaced as indicated in your diagram.

Almost all indoor ranges are restrictive that way. There are still things you can do even if you can’t accomplish everything you’d like.

This is a target from my upcoming Dry Practice book you can print on letter size paper.

Tape it to the head of a silhouette target. It is anatomically sized correctly by using the ocular distance indicated by the line with arrows on the male mugshot of Dennis Rader, the notorious BTK Killer. https://www.biography.com/crime-figure/dennis-rader The dashed circle is sized to four inches in diameter. The pretty lady is a mug shot too, unfortunately, but she serves the purpose of occupying the place of a NO SHOOT.

Place the target at 10 feet, which is the mid-point of the far phase of Social Space in Proxemics. The object of the drill is to place one round in the circle as rapidly as your can. Do it five times in a row. If you hit the lady, you’ve shot a loved one; consider that in your evaluation of your abilities. As Dirty Harry said, “A man’s got to know his limitations.”

Even if you don’t have a lot of flexibility at your practice range, there are still things you can do to up your game.

Why we practice marksmanship – number 2

Investigators say Mills walked into the bathroom where the female homeowner was showering. She screamed and her husband ran in to confront Mills. Police say Mills had a knife and stabbed the husband in the face and stomach before running from the home.

A downrange drill including standoff.

Why we practice marksmanship

“The suspect walked away from his truck and toward a couple that was at a gas pump with their SUV, investigators said. Officers said the suspect then entered the driver’s seat of the SUV while a woman was in the passenger seat.

At some point, police said the man saw the suspect inside of the SUV. He then fired at the suspect sitting in the driver’s seat, striking him multiple times, investigators said.”

Note the position of the bullet holes in the windshield.

Hopefully, the wife exited the vehicle before the shooting started. If not, that was a scary downrange drill, i.e., friendlies or non-threats somewhere downrange between the defender and the criminal. Scary for both the shooter and the downrange friendly. Consider the position of the shooter when the shots were fired.

Armed Citizens are far less likely to have to make a 25 yard headshot on a terrorist than we are to need to make a close range precision shot with no-shoots downrange. It’s something that very few gunowners practice but ought to. In this situation, the hit ratio needs to be 100%, not 70% or 20%.

Even during the Beer Plague, we’re often out of our homes with our loved ones and there’s no guarantee that they will be behind us when trouble starts.

Helping or hurting your case

The justifiability of this shooting will be determined in the courtroom. However, it’s fairly safe to say that not reporting a shooting/killing to the POlice and subsequently tampering with evidence, i.e., throwing the spent shell casings in the dumpster and concealing the revolver, is unlikely to help your case.

Win, Lose, or Draw; the cost of this killing will be high, both psychologically and financially.

Also, the optics of two shots to the back of the head are not good.

Thinking ahead during the current Insurgency

By tacticalprofessor on September 4, 2020 | 3 Comments

Part of dealing with the American Insurgency is thinking ahead about what to do when bad things start happening around you. There are no safe places during an insurgency.

This was the reaction of one person near the shooting.

Note that there were at least 29 rounds fired during the incident. So far, it is unstated how many hit Reinoehl but based on general trends, we can assume that the majority did not. That means at least 15 rounds, perhaps some from rifles, were whizzing around the neighborhood.

According to Wikipedia, https://en.wikipedia.org/wiki/Lacey,_Washington “Lacey is a city in Thurston County, Washington, United States. It is a suburb of Olympia with a population of 42,393 at the 2010 census.” Lacey is 120 miles from Portland and another State away from where the original murder took place. One lesson for us in this incident is that any place within driving distance of a well-publicized shooting is a possible location for a secondary incident. Kyle Rittenhouse went back to Ill-Annoy after the Kenosha shootings.

If you hear gunfire, don’t go outside to watch or video it. Think ahead about the most bullet resistant places in your home. The bathtub, which hopefully is iron, is an example. Even if it’s not iron, it is at least surrounded and supported by structural members. Rehearse a sheltering plan ahead of time. Make sure your loved ones understand it; they might have to use it when you’re not there. It might look something like this:

The most important tool you have during a crisis is the one between your ears. As with almost all tools, it’s better if you sharpen it before you need to use it.

Tactical Professor books are available from the menu at the top of the page.

Someone on Instagram asked me about doing 65 yard headshots with a pistol. My response was that it doesn’t really concern me. I’m much more interested in teaching as many gunowners fundamental skills as I can and then integrating decisional training along with those skills. As long as a person can pass an entry level CCW Qual Course, they’re probably ready to start working on the decisional aspects of Personal Protection.

Skip Gochenour, who ran the National Tactical Invitational for many years, and I had a conversation about this years ago. Skip’s opinion was that we need to get training about human dynamics and decision-making into the training sequence much earlier. I agree with him 100 percent. Decision-making is what makes us or breaks us when the situation starts getting dicey.

I’ll be testing my theory at The Mingle 2020 in a couple of months. In the meantime, I’ll be starting a new 3 dollar Patreon tier for teaching marksmanship and manipulation skills early next month (September).

The way it’s going to be structured is by using CCW Qual courses as a baseline and a learning vehicle. The head of the US Army Ranger School once commented that the purpose of Ranger training is to teach leadership under conditions of stress. Patrolling is just the vehicle or method used to teach leadership to Ranger Students. I think we can use qualification courses in the same way. Given the ammo shortage, it will be largely dry practice with an occasional live fire session.

Here’s the first set of videos that show the first Course of the series. There will be demos for both autoloaders and revolvers.

One using the SCCY pistol:

As always, Tactical Professor books can be purchased from the menu at the top of the page. They are NOT FREE but if you would be interested in knowing how to better operate the firearms you own during the American Insurgency, they will be useful.

The LAPD Categorical Use Of Force report about the UD of a snub revolver http://www.lapdonline.org/assets/pdf/040-19%20PR%20(NTUD).pdf generated a fair amount of interest. Here’s a follow-on idea.

These three Lessons To Be Learned From The Incident were mentioned last time.

Keeping a speedloader filled with dummy rounds accessible allows you to accomplish all three of these tasks. You could do the same thing with a Speed Strip, pouch, or loops. 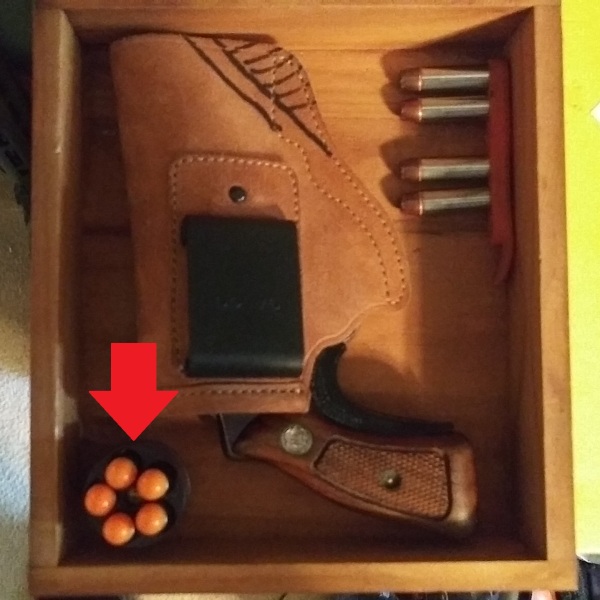 Using this procedure helps protect you, your gun, and gets in two good reloading repetitions.

There are many valuable lessons to be learned from the LAPD Categorical Use Of Force reports. http://www.lapdonline.org/categorical_use_of_force Most of those lessons relate to the dynamics of Officer Involved Shootings. However, the reports also provide a detailed account for every Unintentional Discharge by a Los Angeles POlice Officer. This particular incident relates to the UD of a snub revolver.

Officer A brought his/her back-up service revolver home with the intention to clean it.

According to Officer A, he/she normally conducted dry trigger press exercises approximately three times per week, on his/her days off. However, Officer A stated that he/she usually practices with his/her semi-automatic service pistol, and this was the first time that he/she practiced with his/her revolver.

According to Officer A, believing his/her revolver was still unloaded, he/she placed his/her finger on the trigger and pressed it a third time, which caused the revolver to discharge a single round. No one was injured by the discharge.

Lessons To Be Learned From The Incident

The value of reading about incidents like this is not to criticize or heap scorn but rather to learn hard lessons from someone else’s Negative Outcome.

Dry practice is a valuable way to build skill, especially with a wheelgun. Make sure that you are alert and focused on the task and observe safety procedures rigorously.

Another off body carry incident, with a twist

The incident occurred in September of 2016. The shooter was convicted of Aggravated Battery with a Firearm at a bench trial in November of 2017. This month, the Appellate Court reversed his conviction. He’s been in prison ever since his arrest.

A woman invites a man she’s never met in person over for sex. While they are in the midst of the act, her boyfriend shows up. The naked man grabs his pistol from under the bed and shoots the boyfriend because the man feels threatened. He is eventually arrested, tried, convicted, and sent to prison. Four years later, his conviction is reversed on appeal.

THE PEOPLE OF THE STATE OF ILLINOIS, Plaintiff-Appellee, v. ROBERT D. WILLIAMS, Defendant-Appellant.

Although the case has some lurid traits, it’s also very interesting from both the legal and tactical perspectives. I’m summarizing it on my Patreon page https://www.patreon.com/TacticalProfessor but the Appellate ruling provides a lot of detail you can read for yourself.

As always, should you or your loved ones be interested in learning to use your equipment better during the American Insurgency, my books are available at the menu at the top of the page.

Parks, a legal gun owner, said he took a handgun out of his glove box and got out of his car, keeping the gun at his side.

I’m not much in favor of keeping guns in glove boxes, door pockets, etc. but the idea that doing so will certainly lead to your demise is not true either. Many, many incidents have a build up to them, perhaps more than don’t.

Note also that the defender fired two shots from his handgun and did not, in fact, need to fire two full magazines of ammunition to kill his attacker.

Tactical Professor books are NOT FREE but if you would be interested in knowing how to operate the firearms you own during the American Insurgency, they can be purchased from the menu at the top of the page.