Having acquired a Ruger LCR, I decided to put it to the test. Once again the timer and the target tell an interesting story. To make the day a good #wheelgunwednesday, I took four revolvers out; Ruger LCR, S&W 642-2 Airweight J Frame, S&W Model 36-1 (3 inch), and my EDC S&W 43C. The LCR had a Rogers Enhanced LCR stock, the 642-2 wore Sile rubber stocks, the 36-1 had Pachmayr Compac stocks, and the 43C used the standard factory boot grip. Ammunition for the .38s was Tula steel case and for the 43C, CCI Stingers just as I load it for carry.

The test I used for the comparison was my 5^5 drill; five shots in five seconds at five yards into a five inch circle five times in a row. I made up a target for the test so that I could record the times and results on one sheet. The circle is a CD, so it is actually 4.75 inches in diameter, not 5 inches. The markers bleed through and I shoot the back to reduce visual confusion. After shooting each run, I wrote the time on the target. 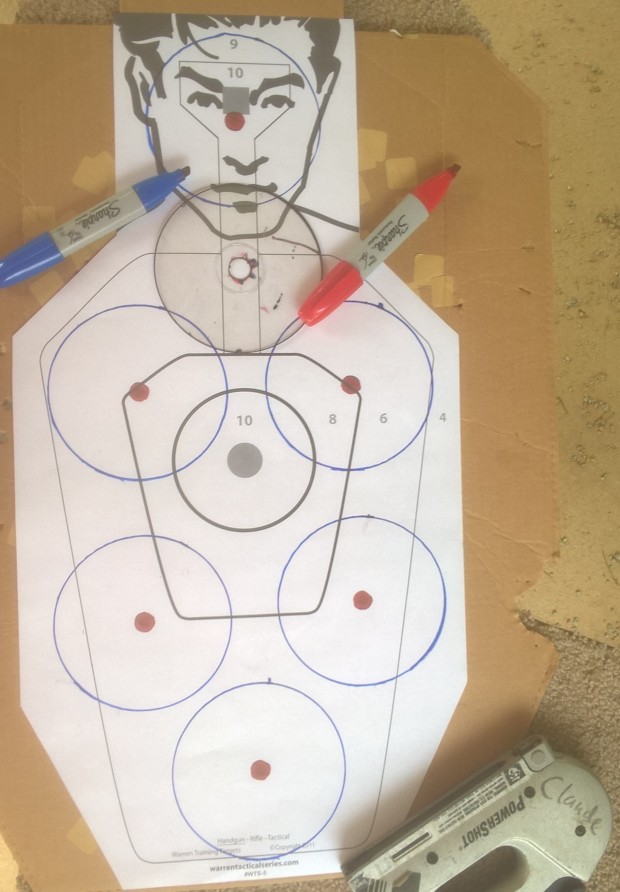 The very first shots confirmed something I’ve said for a long time; ‘feel’ is utterly irrelevant until the shooting starts. Even then, it needs to be tempered by measurement. The Rogers stock feels really good to handle but during the first string my immediate thought was “Whoa, this thing kicks!” I shot a second string with the 642-2 with the Sile rubber stocks as a comparison and found the recoil much less unpleasant.

The shooting then began in earnest. First string with the LCR, I managed to double clutch it and had to run all the way around the cylinder again to get the round to fire. As a result, that string was 5.58 seconds and incurred a penalty. I’ve had that happen to me in the past with Ruger revolvers when running them fast. It was the main reason I discarded the idea of using a Ruger revolver for competition years ago and stuck with Smith & Wesson. I speak for no one else, but I’ve never double clutched a stock S&W action.

In the end, the LCR, despite having a ‘nice trigger,’ wasn’t the winner.

I’m glad I included the 43C in the test. There were no Failures to Fire with the Stingers despite the gun having a 9 lb mainspring instead of the factory 12 lb mainspring. We all acknowledge that .22s are easier to shoot but this is the first time I’ve actually quantified how much easier. As the percentages in the table show, the answer is ‘a lot easier.’ One of my colleagues asked me a while ago, “Well, if I can shoot a .22 better than anything else, does that mean I should carry one?” There’s a philosophical question that is worthy of consideration, especially in the case of those who aren’t ‘elite marksmen.’ Is it the Indian or the arrow?

The LCR is a nice gun and I’m not sorry I picked it up. I’m going to repeat the test in the future with some different stocks to see how much difference that makes. But for now, I’m not ready to give up my J Frames.

FTC Note: I bought everything used in the test and receive no compensation for anything I say.