In the firearms training industry, butthurt is a common condition. There’s quite a bit of it going around right now. The current crop of butthurt, as usual, revolves around equipment, technique, class organization, and philosophy. 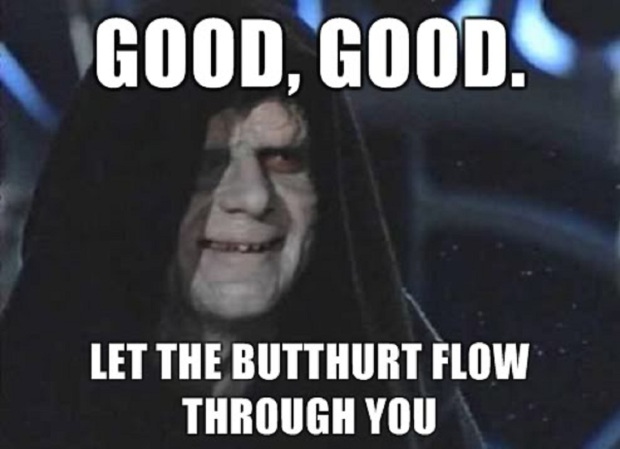 Yesterday, I was able to take Training Day 2 of the Rangemaster Advanced Combative Pistol course. Both Mindset and physical skills are part of the course. This is the third training class I’ve taken in the past two months, in addition to attending the Rangemaster 2017 Tactical Conference. The others were Law of Self Defense and NRA Personal Protection Outside The Home.

One of the things I get the most out of when I attend training classes is the side discussions I have with my colleagues teaching their classes. We’re all willful individuals with strong opinions based on our own experiences. More often than not now, I listen to the other trainer’s opinion without expressing much of my own. This allows me to think about not only how we might differ but also how we might agree.

Upon returning home last night, I reflected about common standards within the firearms training industry. Even those trainers who say they don’t espouse Standards actually do, without realizing it. Standards aren’t necessarily numbers on a piece of paper, they can also be messages that we send to our clients. Sometimes, those messages are even more important than the numbers. One of my Father’s maxims to me when I was a boy was:

Try to get along with everyone, Son, but don’t let anyone hurt you.

That’s a very concise Standard in the form of a message. I’ve followed it ever since.

So, what Standards, in the form of messages, do almost all firearms trainers have in common? The following list occurred to me. There are probably even more. It applies from the most newly Certified NRA Pistol Instructor to those of us who have been teaching for decades.

1) Implicit in the very concept of training is the goal to think ahead. Whether we’re talking about the physical skill of operating a firearm or tactics to avoid becoming a casualty, we want you to think ahead. Trying to learn a skill or tactic in the moment can be a very disconcerting experience. Having operable equipment is also part of thinking ahead. I have twice encountered situations where ladies owned a gun, in one case for years, without having any ammunition. That’s not what I would call thinking ahead.

2) “I could never shoot someone to protect myself.” Every trainer has heard that at some point in their career. The person saying it has not yet “Proclaimed their own Magnificence” as John Farnam puts it. Contrary to the current Politically Correct thinking, everyone does NOT have the same value to society. A Violent Criminal Actor who would callously murder a six year old child strapped in a car seat has no redeeming value to society and never will, period. Nor does someone who would rape two young girls and murder them by burning them alive, after having raped and murdered their mother and beaten their father to a pulp with a baseball bat.

The many many many good people of our society should have no compunction whatsoever about protecting themselves by shooting loathsome criminals of such ilk. We as trainers want our clients to understand that they have a lot of value as human beings and deserve to continue living their lives without being victims of such vicious attacks. Someone once told me I give my clients ‘permission to be rude.’ That’s true of the entire industry.

3) Although we may interpret it in different ways, we all want you to know what you’re doing. Firearms are complex mechanical devices. Some aspects of their operation are either not instinctively obvious or are even designed in a way that requires an explanation or procedure to operate safely. For instance, all firearms are designed so that you can instinctively place your finger on the trigger. Consequently, that’s what people do if they are not trained otherwise.

4) We want you to Succeed. Although our methods may differ radically, I cannot think of a single trainer in the industry who sets out to make sure their students fail. Success breeds confidence. Confidence leads to Proclaiming Your Magnificence. We’re all trying to move our students in that direction.

5) Avoiding Negative Outcomes is a goal of all training. Although I may have coined that particular phrase, it has been the goal of the training industry from the beginning. Trainers don’t want you to shoot yourself, your family members, people around you, and we don’t want you to have to interact with the legal system because you made a mistake. Knowing what you’re doing and knowing the rules goes a very long way to avoiding Negative Outcomes.

And Negative Outcomes don’t just occur in the moment either. Survivor’s guilt can be a terrible thing.

6) Unless you’re an Assassin, all criminal events start with the protagonist behind the power curve. Whether it’s beginning from ‘the Startle Response,’ being on the bottom of ‘Initiative Deficit,’ or simply using a timer or whistle, we want you to understand you’re not going to be the one who starts the action. The criminal is going to do that.

To paraphrase Tom Givens ‘You don’t get to choose when you’re going to have to defend yourself, the criminal does. And they are only going to notify you at the last possible moment.’ A fallacy that many firearms owners fall into is thinking that the sequence of a violent criminal attack is going to parallel the order of shooting at a range where the shooter decides when to pick up the gun and shoot. That’s the opposite of the way it really works.

7) Being victimized may well be the most stressful event of a person’s life. The first time we encounter a stressful situation is always the hardest. Trainers are all trying to provide you with a low level stress vaccine so that you can more easily cope with a real situation if it ever occurs. That’s not to say dealing with it is going to be easy, but it will probably be easier the second time. That’s the best we can do.

We trainers all have Standards, too. They may just look a little different from behind the firing line.