By tacticalprofessor on October 18, 2014

There are so many times in a day when you have to let people into your space. I think we have to accept it. My tolerance changes radically when I’m in transitional areas like parking lots etc.

It’s important to take context into account when speaking about SAP. There’s been some commentary about my post that I must not live in a big city or ever take the subway. Since I grew up in Chicargo and live in Atlanta, that’s not true. I ride public transportation quite often, even when I don’t have to.

The comment about transitional areas is on point. Rarely are we concerned about being robbed or beaten up in line at Starbucks. The video of the dude getting mugged in NOLA recently is more our concern and representative of the positioning I’m getting at. 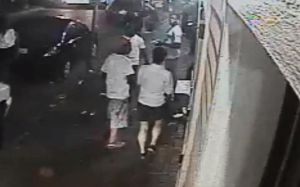 While public places, e.g., the coffee shop in Lakewood WA, and crowds are not totally risk free, I think my colleague William Aprill would say our risk profile for violent crime is lower there than in transitional areas or when we are alone. The criminal incidents that I personally have had to deal with all fell in those two categories. Either positioning or awareness, along with will, allowed me to control those situations. Controlling the situations allowed them to conclude without anyone getting shot or stabbed, which is my desired outcome.

In fact, one of my encounters took place at a MARTA train station in Atlanta at 9 a.m. I was alone and midway through the station on my way to work, so both criteria (alone and in transition) were met. It was what I call an “opportunistic meeting engagement.” Three individuals coming from another direction apparently liked the fact I was on crutches and in a boot from a recent surgery. It was the first time in my life I experienced Clint Smith’s saying “Predators look at you like you’re food.” But I saw their look, change of demeanor, and change of direction from the full width of the upper platform while they were still about 15 yards away. That immediately put me into Condition Orange and I initiated my reaction. Because I had seen them so far away, I had time to react on my terms, rather than theirs. There was no escape for me since I could barely hobble on my crutches. So I faced them, put my hand in my overcoat pocket on my snub revolver and said to myself “Guys, this isn’t going to turn out the way you think it is.” I don’t believe I said it out loud and no words were exchanged between us. At the moment I thought it though, the Marine Corps Drill Team could not have done a better Right Flank, March than those guys did, in unison. Clearly, this was not their first rodeo.

What happened was that they targeted me in an obvious fashion. When a sketchy character, or three of them, changes direction and begins to close with you, it’s an indicator that an incident is developing. As a police officer friend says “Nothing good is coming of that.” However, I failed to act in the way I was supposed to. In John Farnam’s vernacular, I ‘failed the interview.’ Most criminal predations on the street begin with an evaluation by the predator as to whether it has the potential for being a successful victimization, as opposed to turning into a fight. Economic predators are not generally interested in a fight. They know all too well that there is an element of chance in every violent encounter. That is not to say they won’t fight, but rather given the choice between a victimization and a fight, they will pick the victimization.

So our object is to see them early enough and understand what is happening such that we can set ourselves up to fail the interview. The criminal then moves on to find another victim. I would prefer that they pick an undercover police officer and then get dealt with.

However, what happens afterward is not my problem. I am not a police officer; my weapons and tactics are for protecting me and mine, not society at large. That’s the way our legal system is structured; I understand it and abide by it.