Fast is fine, but accuracy is everything. In a gun fight… You need to take your time in a hurry.

One of the memes in firearms training is “I’ve never seen a timer in a gunfight.” This is hugely misleading in the way it’s often understood. The timer that is present is your life-clock. Don’t think it isn’t running every nanosecond of a deadly force encounter. While we need to be deliberate and make our hits, as Earp stated, we don’t have all the time in the world to do so, as he also stated. So we need to establish some kind of time standards in our practice, at least for some of our drills. The question is how do we do so, both in principle and in practice?

There are two principal ways of measuring time. One is measuring it directly. For instance, a shooter might be able to draw and fire a pistol in 1.4 seconds. To achieve a meaningful level of accuracy in that measurement, we would use a ‘shot timer.’ Shot timers give an audible or visual signal to the shooter and then record the time taken for the task via a microphone in the timer that hears the shots. Shot timers range from fairly simple push a button types costing around $125 to more complex devices with numerous features than run about $200. They all work fairly well. The choice largely depends on the features you want. One downside is that shot timers cost more money than many people want to spend.

On outdoor ranges, shot timers work really well. On an indoor range, not so much. Measuring time is much more difficult in the indoor environment. Multiple shooters adjacent to each other interfere with using a standard shot timer. If your timer is picking up the sound of someone else’s shots, it’s not doing you any good.

This issue brings us to the second way of measuring time, par time. Par time means that the shooter has a fixed amount of time to accomplish the task. Drawing, reloading, and presenting from ready are all tasks that can be accomplished in par time. For instance, we might say that a police officer is allowed 2.0 seconds to draw from a security holster. Par time lends itself much better to mass training, such as in the police and military than individual measurement, which would be prohibitive for training time-wise.

The times in the NRA Marksmanship Qualification Program and The Tactical Professor’s Pistol Practice Program  are par times. So are most police qualification courses. Some ‘proficiency demonstrations’ that private citizens are required to do to obtain a Concealed Handgun License are timed. Those are par times, as well.

Par time can also be an effective way of practicing on an indoor range because we don’t have to be concerned with the effects of other shooters’ gunfire on a shot timer. Most shot timers will also do par time by sounding a second beep at the end of the par time. Unfortunately, the second beep is easily drowned out by nearby gunfire.

The simplest solution is to have a partner time you using a watch or stopwatch. Your partner can tap you on the back once for go and again for stop. It’s not terribly accurate but better than nothing.

If you go by yourself, an interval, or countdown, timer can provide a workable solution, especially if it has a visual signal or vibrates. This is a good way to get around the noise issue of indoor ranges. The vibration is becomes your start/stop signal

The first solution I used is a vibrating wristwatch. It has a countdown timer function.

Another is the Gymboss that can be clipped to the pants or belt.

The CED Universal Countdown Timer vibrates and also has a visual signal the form of a blinking light. This is the one I find myself using most.

Time is a critical component of defensive training that many people don’t work on for a variety of reasons. Adding in time pressure to your shooting practice is a worthwhile way to increase your proficiency. If you are going to get a Concealed Carry License in a state that times the qualification course, it’s a good idea to practice ahead of time to get a feel for the cadence you’ll have to shoot at. 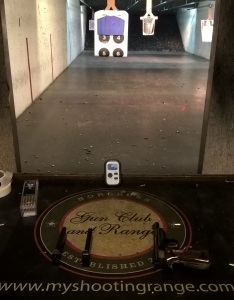