Continuing on about the Rangemaster  2015 Tactical Conference held annually in the Memphis area, I would like to cover the high points of some sessions I attended.

John Hearne’s Performance Under Fire presentation was so packed with information that it’s hard to take it all in. He does a fine job of refuting the pseudo-science that pervades the personal protection training community. His research is thorough, up to date, and can document fully what he says. An aspect of his approach I like is the way he tracks the original science to see if it has subsequently been refuted. John is one of the few people in the community besides myself who has any clue about how to do research. Here’s a clue; taking information from a firearms or martial arts trainer at face value is not a valid approach. I found numerous points in his presentation quite useful.

He stated that there are actually 21 documentable ‘flinch responses,’ most of which do not involve throwing one’s hands up in the air. So if there are a variety of responses, how do you know which one you will exhibit and is it going to be the same one every time? Years ago, Ken Hackathorn told me to watch surveillance video of convenience store robberies to see how many people threw their hands up in the air when they were startled. The answer is ‘not many.’

One of my personal pet peeves is the continuing blathering about Hick’s Law in the community. John made the point that Hick’s Law was largely discredited in the scientific community decades ago. For those unfamiliar, Hick’s Law states that the more options you have, the longer it will take to make a decision, by a square of the number of choices. The original study was sort of iffy anyway and subsequent research has shown that it’s only true in the absence of any familiarity with the task and absent any practice on the decision making.

The subsequent power law of practice states that the more practice you have at making the decision, the faster you get at making it. There’s some question as to whether the practice/speed relationship is logarithmic or exponential but there’s no question about the validity of the power law. Think about it in terms of when you are driving. When you see the brake lights of the car in front of you come on, there’s no conscious decision making about whether you’re going to hit the gas or the brake, unless you’re a 15 year old student driver.

An important point John made was about the career time of when law enforcement officers were feloniously assaulted. The average time was about eight years. I believe John referenced this from the 2006 FBI study Violent Encounters, A Study of Felonious Assaults on Our Nation’s Law Enforcement Officers, but I don’t recall for sure. This was important to me because it highlighted the factor of complacency in Negative Outcomes.

Although I lack the rigorous methodology that the FBI used, it’s my feeling this is also a factor in Negative Outcomes by Armed Private Citizens. Complacency can be a killer. We see it every day at gun ranges, gun shops, and shooting clubs. Complacency is why some people have one year of experience 20 times instead of 20 years of experience and is closely related to the “I know it all” syndrome. We have all had to deal with ‘know-it-alls’ and ‘spring-butts’ and never like it. It’s up to us individually to make sure we don’t fall into the trap and challenge others who have.

Just to show that John can put his money where his mouth is, he won the High Lawman and Second Place overall in the shooting contest. 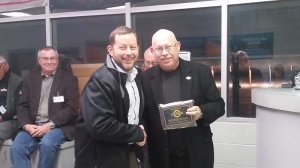 I’ll have more about the Conference next time.