As Instructors, we’re in the adult learning business. The firearm is merely the tool that we use to facilitate the learning.

In a recent class we had a scary incident.

A student got hot brass down his shirt and did the “hot-brass dance”. Unfortunately, in this version of the dance he turned 360º and muzzled everyone on the range.

Some of you aren’t going to like how I chose to handle the incident.

Thankfully one of my assistants was right on top of him, physically restraining him to stop and control the student – and his muzzle. It looked a little harsh when it happened, but it was the right response. Sorry you’re getting burned, but muzzling everyone cannot happen. Get that under control, then we can deal with the hot brass.

Yes, it sucked this happened in class. No, I’m not happy it happened on my watch. It was a scary moment for sure.

At the end of every class, we go around to each student and ask them to tell…

Putting it on the line….

I’m often asked what the value of competition and demonstration is. Here is one of the best answers I’ve heard.

To compete or demonstrate has a level of risk inherent to it. When challenged, you could perform perfectly or fail to demonstrate the skill necessary.

Why would any instructor or shooter take such a chance?

I recently attended the 20th anniversary Tactical Conference (Tac Con) hosted by Tom and Lynn Givens of Rangemaster. This is a smorgasbord of talented instructors from across the country where attendees can take 2-4 hours blocks of instruction in pistol, rifle, shotgun, legal, medical, combatives, and much more.

I was able to train with, or work the line with, many of the top instructors like Claude Werner, John Farnam, Ernest Langdon, and Gabe White. They all had many commonalities in their teachings, and they all demonstrated drills and skills they taught.

Excellent food for thought. No one wants to turn into something they don’t want to be.

“Who wants to spend money, time, and effort to achieve a goal they loathe?”

Purely on a mechanical level, lots of reps. The average number of repetitions I did each day was somewhere between 30 and 40. Some of the regimens I have used frequently in the final year are:

Let’s say the average is 40, which might not seem like a lot on an individual daily basis. However, by the end, I will have seen the sights and pressed the trigger smoothly 40,000 times. Dryfire provides feedback on the quality of those movements in a way that livefire cannot, simply because of recoil. Even if I didn’t already know how to the see the sights and press the trigger smoothly, 40,000 deliberate repetitions of them with quality feedback would go a long way to learning them. Not to mention the difference in cost between firing 40,000 dryfire repetitions ($0) and 40,000 rounds livefire (~$10,000 for the ammunition alone).

Since I religiously check the status of my pistol each day before dryfiring, I will also have completed 1,000 repetitions of correctly determining the load status of my firearm. My procedure for doing that has become completely automatic. I notice it when I go to the range or a gun shop and someone hands me a pistol; I don’t even think about checking it, I just do in a sequence.

On another level, I learned to plan ahead, develop a list of options, and then decide which option to implement in the moment. All of the above regimens have some training aid readily available in my dryfire practice area. For example the TPC dot target and 12 shot drill are two of the targets I have hidden behind a novelty sign in my practice area. The LAPD Bonus Course, Ill-Annoy Police Qual, and FAM TPC are recordings on my phone and in my computer. Defensive Pistol I is a sheet I have on a clipboard in the area.

For each regimen, I developed the material ahead of time. Then I set it up so I had immediate access to the target, the recording/sheet, or both. This is John Boyd’s true legacy to us about tactics, drawn from the Aerial Attack Study, not some nearly incomprehensible diagram and touchy-feely misinterpretation about outwitting our enemies in the moment.

By having an already developed group of options, we can pick from them and execute immediately even when we are tired, stressed, or simply don’t know what else to do. Getting into the habit of thinking ahead of time, developing options, and then simply picking from the list when needed has been a powerful learning experience for me.

Having a list of options doesn’t preclude me from adapting and improvising for the situation. I don’t have a set regimen for practicing with my flashlight. Instead I pick one of my regimens and do it with a flashlight.

Philosophically, making the commitment to follow a daily process of repetition and desire for excellence has been the most valuable part of the 1,000 Days. Periodically, people ask questions like “Are you really planning to do this for 1,000 Days straight? Although I generally respond with a simple ‘Yes,’ there’s a lot more to it than that. Aristotle said:

We are what we repeatedly do. Excellence, then, is not an act, but a habit.

That applies in many areas of life. While I was developing some sales tools for real estate agents and other salespeople, a friend commented that her firm already had a training program and tools for their people. She said that many of the salespeople didn’t use them though and were always looking for something new or ‘cool’ or simply improvised on their sales calls. Doing so tended to produce mediocre results because they were always improvising.

Bruce Lee is reported to have said:

Colonel Boyd provided us with an example of how right Lee was. Boyd’s reputation as ’Forty Second Boyd’  [Coram, p 88] was gained through his ability to perform one single aerial maneuver with the F-100 fighter better than anyone else in the world. During his years as an instructor at the USAF Fighter Weapons School, he was never bested and only was only flown to a ‘dead heat’ once. He had pushed and tested the F-100 to its absolute limit on one aerial braking maneuver over and over again until he could slow the aircraft several hundred miles per hour in a matter of a few seconds. His opponent, unable to replicate or defeat the maneuver, would then unintentionally fly past him. Boyd would then regain his speed and get on the opponent’s tail, radioing the kill signal “Guns! Guns! Guns!”

In 1983, a very violent gunbattle took place in Medina, North Dakota. Although less well known than the Miami Massacre in 1986, it was every bit as bloody and violent. Something it had in common with the Miami Massacre was the decisiveness of long guns at pistol fight ranges and preparation for conflict.

On one side was a task force of US Marshals and local law enforcement officers. On the other side were members of a local Posse Comitatus group. Casualties were high on both sides. Four months later, a second related encounter, hundreds of miles away, brought more loss of life.

Gordon Kahl was a Midwestern farmer and Federal tax resister. He was a member of a loosely knit organization called the Posse Comitatus. The Posse recognized no authority above the county level and held many hateful beliefs. He had been imprisoned for Federal tax evasion but had been released on probation. However, he failed to report to his Probation Officer and a Federal warrant for his arrest was issued.

The US Marshal’s Office in North Dakota determined to take him into custody as a result of information received that Kahl was attending a meeting in Medina. The Marshal, Ken Muir, and three Deputies; Carl Wigglesworth, James Hopson Jr., and Robert Cheshire drove to Medina to make the arrest. There, they were joined by a Stutsman County Deputy Sheriff, Bradley Kapp, and a Medina Police Officer, Steve Schnabel.

On request of the Medina police Chief, the determination was made to conduct the arrest just outside of town. This was because Kahl was known to carry a Mini-14 rifle at all times. The Chief did not wish to have violence within the town itself that would endanger the townspeople.

A roadblock was set up on the route out of town by Marshal Muir, Deputy Wigglesworth, and Officer Schnabel. The remaining Deputies stayed in town to follow Kahl once he left the meeting. Deputy Kapp joined Deputy Marshals Cheshire and Hopson in the Ramcharger.

Accompanying Kahl to the meeting were his wife, Joan, his son, Yorie Kahl, his friends, Scott Faul, Vernon Wagner, and Dave Broer. Several of the males in the Kahl party were armed with rifles. Joan was not armed.

When the meeting finished, the Kahl party departed town in two vehicles, unknowingly headed toward the roadblock. The stage was set for a bloody shootout.

In the aftermath of the shootout, Muir and Cheshire would lie dead. Hopson, Kapp, Schnabel, and Yorie Kahl would be seriously wounded. Yorie Kahl and Scott Faul would be convicted of murder and sentenced to life imprisonment.

Gordon Kahl was killed, along with Lawrence County (Arkansas) Sheriff Gene Matthews, the following June. A nationwide manhunt had tracked him to Arkansas where a confrontation with local and Federal law enforcement officers took place.

The Marshals Service memorial to Muir and Cheshire can be found here.

10 Rules for Being a Safe Gun-Owning Parent

By tacticalprofessor on October 30, 2015

If I never had to make another entry to my ‘Accidental Shootings by Children’ datafile, I would be quite happy.

Rebecca Bahret of SheKnows.com contacted me recently about compiling a list of the top X-number of safety tips for gun storage when kids are present. I was flattered she thought enough of the blog to ask me. I obliged, obviously, and thought of ten items. With word-count limits, deadlines, and so forth, it was trimmed down a good bit.

It was even worthy of an infographic! Legit. 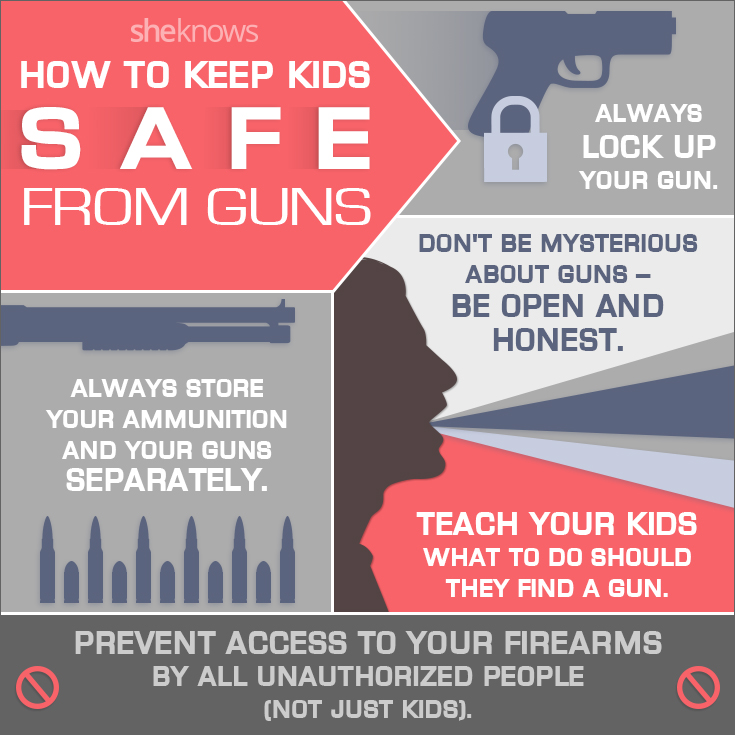 Here is her final article. It’s a great article for her target audience.

Since I’m not obligated to any word count limits, here’s what I sent her. I hope it makes a good compliment to her article: