Before there was an FDIC

By tacticalprofessor on October 30, 2020

In the days before the FDIC, if banks didn’t protect their assets they had no assets.

“They aim to welcome bandits with hot lead.”

Thanks to Michael de Bethencourt of I’m With Roscoe for pointing out the article.

Once you can shoot…

Some instructors, including myself, had an interesting discussion on Facebook about the phrase “once you can shoot.”

My question to the group was ‘What does that mean?’ I asked it as a serious question. The personal journey I’ve made in answering that question over time has been interesting. My answers to myself about it have changed dramatically as a result of some related research I’ve done. The two most significant areas of research were Negative Outcomes and what higher level thinkers in the POlice community had to say. The discussion was involved enough that I wrote a Patreon post about it.

I’m making the Patreon post public because I think it’s a much neglected philosophical discussion. At The Mingle this month, I asked the ladies present to write out their personal policy about when to draw or present a weapon. It was the first time that many of them had ever been asked to do that. We need to realize that ‘Have Adequate [Hard] Skills’ is only one aspect of the issues we face.

Marksmanship is a hard skill but soft skills are important too.

By tacticalprofessor on October 22, 2020

Gripping the gun firmly, including stiffening the wrists, is important in terms of running autoloaders without having malfunctions aka stoppages (Unintentional Interruptions in the Cycle of Operation). This has been demonstrated several times in classes I’ve taught this month; Personal Performance http://www.thecompletecombatant.com/personal-performance.html  and The Mingle. http://www.thecompletecombatant.com/the-mingle.html During both classes, simply increasing the tension in a shooter’s wrists completely eliminated malfunctions in guns that had previously been troublesome.

Rob Leatham gives an excellent explanation about gripping the pistol in this video. Although his video addresses shooting speed, the concept applies equally to increasing reliability of a pistol.

Note how he tests the tension of the shooter’s wrists at 1:05. With a handheld recoil-operated firearm, tensioned wrist(s) are a key input for the gun’s functionality. If the shooter’s wrists are not adequately tensioned, the receiver of the gun moves at the same time the slide is cycling. When the receiver moves simultaneously with the slide cycling, the possibility of the slide not completing its travel fully to the rear increases. Failure to maintain tensioned wrists is often referred to as ‘limp-wristing.’

Knowing the mechanical steps in the operation of an autoloading firearm is useful to understand this problem. Once a loaded magazine has been inserted, the eight steps in the cycle of operation for a locked breech firearm are:

This stoppage must be cleared by using Remedial Action.

An even more exaggerated of the issue can occur if the slide’s rearward travel is so shortened that that the base of the cartridge doesn’t make contact with the pistol’s ejector. This then will result in a Failure to Eject in addition to the Failure to Feed and Failure to Chamber. This stoppage must also be reduced by using Remedial Action. The Failure to Eject aspect is why the step of working the slide several times is included in Remedial Action. Theoretically, a Failure to Extract could occur but this is almost universally ammunition related (oversized, dirty, or grossly underpowered) rather than due to Operator Error.

Working with a partner and a completely unloaded pistol or Blue Gun, as demonstrated in the video, to test and increase the tension of the wrists is a simple way to increase the reliability of the pistol.

Gripping the wrists while moving the pistol.

Your Best Defense: Staying Out of Trouble

I was able to spend some time talking with Michael Bane last week about ‘Staying Out of Trouble.’ That means emphasizing the ‘Avoid’ and ‘Escape’ steps in the Avoid, Escape, Confront, Resist paradigm.

We had a great conversation that will be of interest to new gunowners, those who have been at it as long as Michael and I, and everyone in between.

Someone on Instagram asked me about doing 65 yard headshots with a pistol. My response was that it doesn’t really concern me. I’m much more interested in teaching as many gunowners fundamental skills as I can and then integrating decisional training along with those skills. As long as a person can pass an entry level CCW Qual Course, they’re probably ready to start working on the decisional aspects of Personal Protection.

Skip Gochenour, who ran the National Tactical Invitational for many years, and I had a conversation about this years ago. Skip’s opinion was that we need to get training about human dynamics and decision-making into the training sequence much earlier. I agree with him 100 percent. Decision-making is what makes us or breaks us when the situation starts getting dicey.

I’ll be testing my theory at The Mingle 2020 in a couple of months. In the meantime, I’ll be starting a new 3 dollar Patreon tier for teaching marksmanship and manipulation skills early next month (September).

The way it’s going to be structured is by using CCW Qual courses as a baseline and a learning vehicle. The head of the US Army Ranger School once commented that the purpose of Ranger training is to teach leadership under conditions of stress. Patrolling is just the vehicle or method used to teach leadership to Ranger Students. I think we can use qualification courses in the same way. Given the ammo shortage, it will be largely dry practice with an occasional live fire session.

Here’s the first set of videos that show the first Course of the series. There will be demos for both autoloaders and revolvers.

One using the SCCY pistol:

As always, Tactical Professor books can be purchased from the menu at the top of the page. They are NOT FREE but if you would be interested in knowing how to better operate the firearms you own during the American Insurgency, they will be useful.

The LAPD Categorical Use Of Force report about the UD of a snub revolver http://www.lapdonline.org/assets/pdf/040-19%20PR%20(NTUD).pdf generated a fair amount of interest. Here’s a follow-on idea.

These three Lessons To Be Learned From The Incident were mentioned last time.

Keeping a speedloader filled with dummy rounds accessible allows you to accomplish all three of these tasks. You could do the same thing with a Speed Strip, pouch, or loops.

Using this procedure helps protect you, your gun, and gets in two good reloading repetitions.

Know the rules or suffer a Negative Outcome 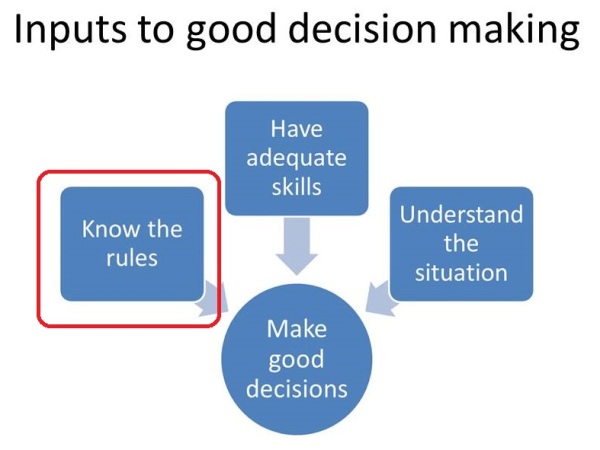 Whatever side of the mask controversy you’re on, pulling a gun on someone because they want you to wear a mask is foolish.

After arguing, prosecutors said the man pulled his .22-caliber revolver from its holster, pointed it at the victim’s sternum, said ‘get the f— away’ and threatened to shoot him.

This man is in the process of suffering a Negative Outcome. Whatever the end disposition is, it will be expensive. The Process will probably not be the only Punishment.

Another aspect of the situation is the possibility of someone in such an agitated state having an Unintentional Discharge when they pull a gun. His weapon was pointed at the interventionist’s sternum and not ‘below the subject’s feet.’ Any intervention carries an element of risk associated with it. An alternate Negative Outcome would be springing a leak as a result of giving someone your two cents. Fortunately, the agitated man was carrying a revolver in this case.

As a peripheral issue, notice also the ineffectual positioning of the POlice department spokesperson’s mask.

To avoid confusion, I won’t list my books in this post because they’re not free. If you would be interested in purchasing any of my shooting workbooks for handgun or rifle, they are available from the menu at the top of the page. As the American Insurgency escalates, you may find having a functional knowledge of the weapons you own to be useful.

Loading (charging) a magazine is another task that’s neither intuitive nor easy for beginners. Here’s an explanation of one way to do it.

Not everyone is going to practice with their new pistol but for those who do, this is a useful skill.

Other useful skills are listed in my book,

For those who only have access to an indoor range, which means 99.999% of new gun purchasers, my book

is a useful resource.

The Polite Society Podcast https://www.youtube.com/channel/UCkVLaQzRB5DKDzZ05J7o2KQ on YouTube has created a series for new gun owners called Guns 101. Each segment is a short (less than 10 minutes) standalone lesson in various fundamental aspects of gun ownership and usage.

The Tactical Professor did a segment on storing guns in cars when it’s necessary. For instance, if a gunowner needed to go into a courthouse, the Post Office, or other denied area, the time to think about what to do with the gun is before you get there.

Also, my book Indoor Range Practice Sessions http://indoorrangepracticesessions.com is an excellent primer for new gunowners who actually want to shoot their guns. When the ranges start re-opening, you can have a plan for when you go.

Here’s an interesting metric for response time I’ve never seen tested. The question came up because of a Twitter post about two unpleasant people having a confrontation in Philadelphia. The verbal confrontation occurred as a result of a car blocking traffic. 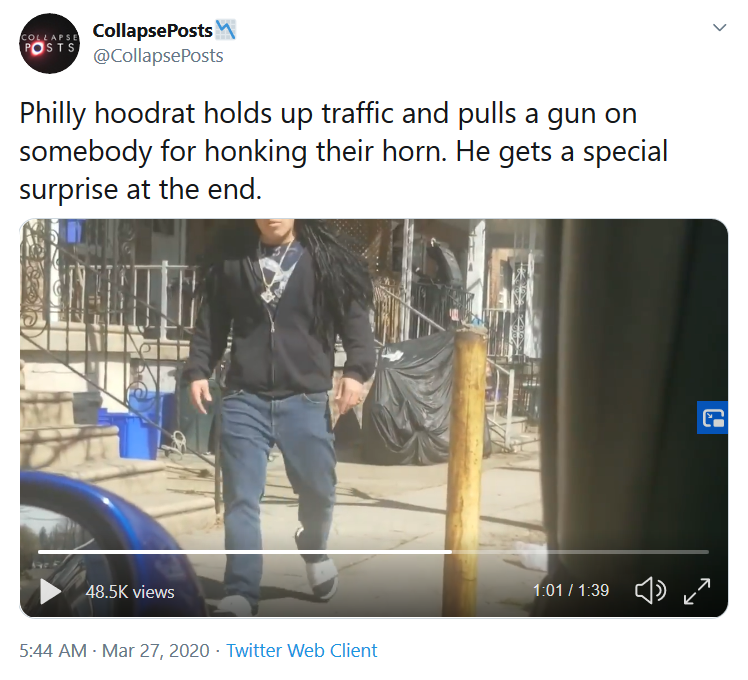 From the standpoint of target engagement, the Footmobile Personage is in a much better position to achieve a good firing stance, either for aimed fire or indexed fire (point shooting). The Automobile Personage would probably be forced into an indexed fire stance because of the angle the target is to him. Unfortunately, indexed fire in this position tends to be very erratic because the left eye has a better view of the target and tends to control the movement of the gun.

Fortunately, the entire incident turned out to be an example of social distanced monkey dancing. Nonetheless, we can ask certain doctrinal questions to help our future preparation and Recognition Primed Decision-Making.

Also, is there gun registration in Philadelphia? I thought that was pre-empted by Pennsylvania State law.

Thanks to Gun Free Zone for drawing my attention to the incident.