By tacticalprofessor on January 28, 2019

Phase 1 of the Odyssey – The drive there

Since we were driving through the Southwest, I felt compelled to make a visit to the site of the Duel at the Dumbster in Abilene. Actually seeing the lay of the land always helps me gain a better understanding of the dynamics of shootings and gunfights.

For those unfamiliar with the incident, here’s a quick synopsis. A father and son confronted another man about placing a discarded twin mattress by the dumpster in the alley. After approximately two minutes of monkey dancing between two prideful fools and a man with mental health issues, gunfire erupted. A few seconds later, the individual with mental health issues didn’t have to worry about his issues anymore because he took a load of ‘scattershot’ to his head, along with other wounds. The fools are now in jail awaiting trial for Murder.

What the issue was with the mattress being there is unclear. However, let’s assume that it had something to do with the dumpster being emptied. There’s a large commercial lot on the other side of the alley. It appears to be hardly used at all and it was quite empty when I visited. 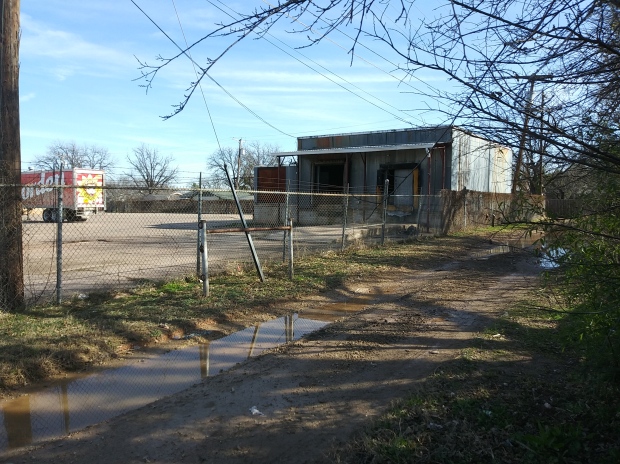 As I looked at the scene, I could immediately imagine what my Father would have said about dealing with that issue.

Son, help me throw this mattress over the fence into the Bordens lot. Then we’ll be rid of the damned thing.

During a discussion of the incident while I was in Las Vegas, a legitimate Operator asked me a pertinent question: “Is there anything to be learned from the incident?” My immediate response was:

About foolishness and stupidity, a great deal

Notice also the background of the downrange area of the shooting. This picture is from the perspective of the father, who was armed with a handgun.

Half a block downrange is a local burger place with another block of houses immediately adjacent to it. Firing a fusillade in which some of the shots don’t hit the intended target in a geographic layout like this means some of those bullets are heading for a home or occupied business. The foolish son’s ‘scattershot’ would have been heading for the houses on his own block had it not hit Mental Man in the head. There have already been several occasions in which a person has been convicted of Manslaughter for killing an innocent person downrange of a shooting. Mark my words and mark them well, that’s going to become much more common in the coming years.

More about the Duel tomorrow.

These are links to my previous posts about the Duel.

Part II (has a video of the idiocy in action) https://tacticalprofessor.wordpress.com/2018/09/22/lessons-from-the-duel-at-the-dumpster-part-ii/

For those interested in improving your skills with a handgun, I have written two books.

For those who wish to avoid Serious Mistakes and subsequent Negative Outcomes, I have made a downloadable recording.