By tacticalprofessor on November 2, 2018

Consistent. Merriam-Webster defines it as:

marked by harmony, regularity, or steady continuity: free from variation or contradiction

During his Technical Handgun: Tests and Standards class last weekend, John Johnston of Ballistic Radio commented to me that the class had been heavily influenced by two conversations he and I had. In one, I said

You’re a good shooter but your consistency sucks.

He took that to heart and developed a personal program to increase his consistency. Technical Handgun is his road show about how shooters can use a personal program to increase their consistency and competency. Good shooting, even decent shooting, is the result of consistency. By that I mean the ability to perform at some level with a high degree of regularity. As we develop our consistency, the level we are able to perform at ‘on demand’ increases. Many shooters are perfectly content with being incompetent. Many others are not but don’t know how to go about increasing their competency.

An example of lack of consistency

This target has been left at my gun club at least once a week most of this year. It changes a little bit each time but always looks much the same.

Lack of consistency is one of the big problems that many shooters encounter. Now and again, they can pull off a great shot, usually due to random chance, but most of the time they’re all over the place, literally. Building consistency is the purpose of having standards and doing repetitive drills. Standards and repetitive drills are the way all shooters get better. Without them, the chances of becoming a better shooter are negligible.

The NRA Marksmanship Qualification Program Defensive Pistol Courses of Fire are good examples of standards that shooters can use to establish a baseline of their abilities. The standard to complete the Courses is 100% at each of the six levels. That’s an example of consistency.

Another problem many shooters face is consistently doing things wrong. The bullseye target on the inconsistency target is a good example. 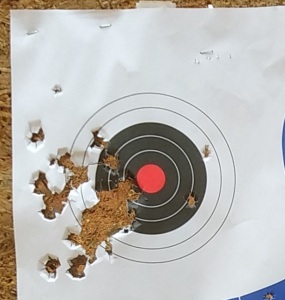 Consistency doesn’t necessarily apply to just shooting, either. Gunhandling is another gun related task that requires consistency. Those who consistently: 1) keep their fingers out of the trigger guard until they’re ready for the gun to discharge and 2) point their firearm at something other than themselves are unlikely to suffer a self-inflicted gunshot wound. Failing to consistently do those things all the time is a setup for a Negative Outcome.

I’m sorry for the officer but the chances are much greater that he made the gun off while it was pointed at himself than the pistol decided on its own volition to go off.

For those shooters who are interested in increasing their consistency and competency, I’ve written two different eBooks. They provide a roadmap to improving your competency at your own pace and within the resources you have available to you. For less than the price of a box of ammo, you’ll be able to use your time and other resources much more effectively. Then you won’t repetitively produce targets that look like the inconsistent one above.

For those who carry a concealed firearm, Concealed Carry Skills and Drills, is appropriate for you. It includes instructions for the NRA Marksmanship Program Defensive Pistol Course of Fire. The link to the downloadable eBook is here. http://concealedcarryskillsanddrills.com

For those who don’t carry a concealed firearm but keep a handgun for home defense, Indoor Range Practice Sessions, is appropriate for you. The link to the downloadable eBook is here. http://indoorrangepracticesessions.com

FTC Note: I didn’t pay to attend the Technical Skills class but I receive no consideration for using it as an exemplar.