The Editor of a publication I occasionally write for asked me to participate in a project about comparing different handguns. Being the revolver guy I am, he asked me for some input about how wheelguns fared. His concept is:

[R]each an objective: identifying a short (20-rounds) base of standards for defense handguns to (1) compare similar format guns, one to another, (2) compare formats of handguns (small, single stack or subcompact), (3) “shoot out” duty/defense ammo for replacement while evaluating personal skills, (4) yet another “cold course” of fire to identify skills areas that need attention.

This is the Course of Fire he developed.

It’s an interesting concept, so I shot it with four different revolvers and two autoloaders.

All were shot from Appendix Inside the Waistband carry except the SD9VE. The centerfire revolvers were reloaded using a speedloader carried in a centerline carrier. The 43C was reloaded using a QuikStrip carried in the watch pocket of my jeans. I used Remington Golden Bullet bulk ammo in the 525 round box for the 43C. Despite it having a 9 pound mainspring, which I have been told will get me ‘kilt in da streetz,’ there were no Failures to Fire.

We were free to use any target we wanted, so I used the printable target from my ebook Concealed Carry Skills and Drills. Per his instructions, the scoring was Vickers Count with ½ second added per point down. I used the Circle as the -0, the paper target as -1, and the balance of an IDPA target backer as -3.

An interesting aspect of the Course is that every shot or two is scored individually. This involves a lot of walking, especially for the five shots at 25 yards but gives a lot of feedback about the efficacy of one’s shooting. In the spirit of the analysis, I marked the target at every distance change to keep track of where the bullets were hitting. 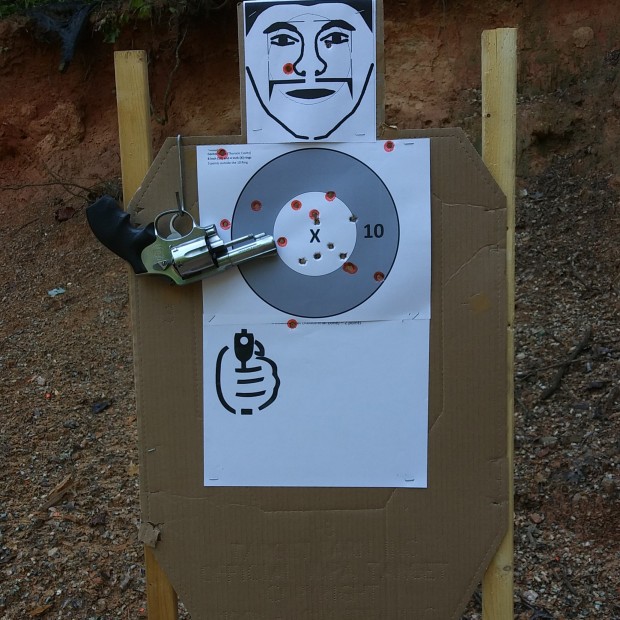 Here’s how the results came out. 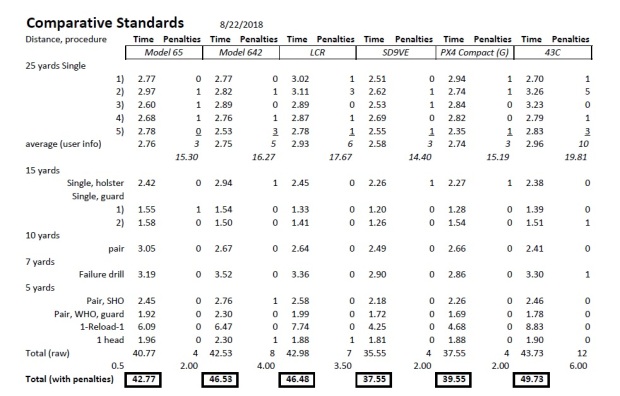 It’s a demanding benchmark analysis. I’m looking forward to seeing the results of the other testers.

If you would like to purchase Concealed Carry Skills and Drills, the link to the downloadable ebook is here. http://concealedcarryskillsanddrills.com