How much does barrel length matter?

By tacticalprofessor on April 4, 2018

The timer and the target sometimes tell interesting and unexpected tales. A long held opinion is that a longer barrel is easier to shoot, both in terms of accuracy and shot to shot recovery, than a shorter barrel. For #wheelgunwednesday, I decided to put this theory to the test. Several different revolvers of varying frame sizes, weights, and barrel lengths were used to shoot a standard drill and compare results.

Justin Dyal wrote an article for SWAT Magazine about a drill he created called Five-Yard Roundup. It was used as the semi-final test at the Rangemaster 2018 Tactical Conference. Especially in the context of snub revolvers, it’s a good test of skills that may be required for personal protection.

Since the drill is only 10 rounds, it allows a variety of handguns to be shot in the same day without fatigue setting in and skewing the results. Since I was using a timer, I recorded the actual times for each string. The original concept of the drill is to use a 2.5 second PAR (fixed) time for all the strings.

To give the drill a more meaningful degree of precision for most shooters, I substituted an IDPA target for the B-8. I further modified it by using an Negative target. For those unfamiliar, a Negative target has a cutout center. Rounds striking anywhere in the cutout zone are scored equally, further accentuating the concept of meaningful degree of precision. Using a highlighted Negative target trains the shooter to visualize the appropriate aiming area in a defensive situation.

Since Five Yard Roundup has no reloading on the clock, I was able to put a dent in my supply of Tula 130 grain ammo. It’s not bad shooting ammo but extraction can be difficult. Often, I found it necessary to tap the extractor rod with a rubber mallet to get the cases to extract. I don’t have a chrono so I can’t say about the velocity, but it seems to have slightly more recoil than US 130 grain loadings.

The surprise winner: My Smith & Wesson Post-war M&P 5 screw 2 inch snub with Uncle Mikes Boot Stocks, as pictured above. It has a short barrel, smaller stocks, and narrow sights. The front sights has been filed to a flattened ramp, serrated, and painted. The trigger pull is very smooth, although not particularly light,  regardless of what mainspring is installed in it.

That being said, I’m not sure there’s much of a meaningful difference between barrel lengths, weight, and frame size. Even the difference between J Frames and K Frames wasn’t that much to rave about. The question of ‘meaningful degrees of precision’ definitely comes into play. The spread between the highest and the lowest is only about two seconds.

Another aspect of the analysis to consider is that the originator set this drill up for a PAR time of 2.5 seconds for each run. If I shot this again working only to beat the PAR time and not to go as quickly as I could, there would probably be no difference at all. I was well under the PAR on all these runs. The few -1 hits I had were only slightly outside the -0 zone.

At the end of the day, this is what the target looked like. I shot the Model 10 a second time as a control for the Training Effect. The masking tape is where the -1 hits were. 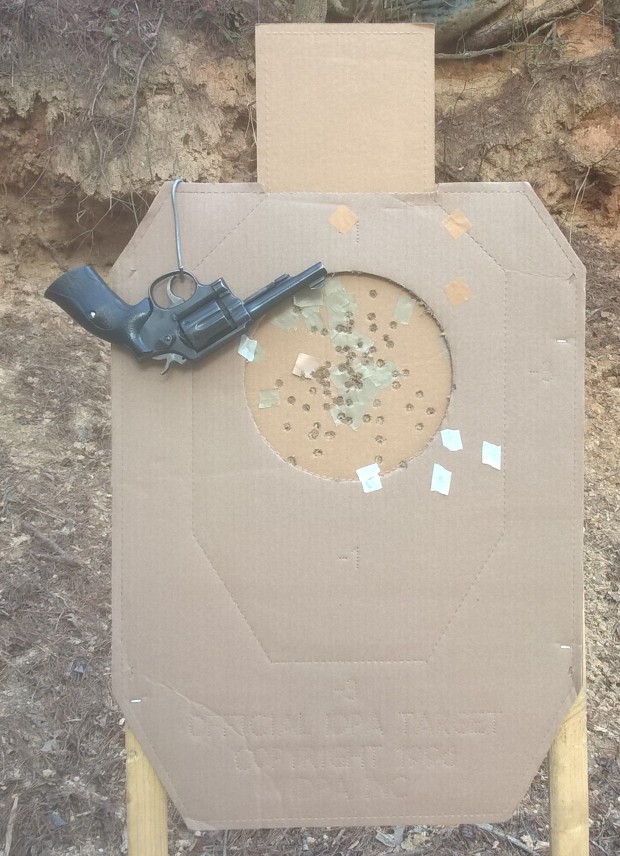