By tacticalprofessor on February 25, 2018

The two loudest sounds when shooting are:

A click when you expect a bang with centerfire revolvers often means that tools will be involved in fixing the problem. An example is a broken hammer nose on older Smith & Wesson revolvers. Until the 1990s, these revolvers had the ‘firing pin’ integral with the hammer. S&W refers to this part as the ‘hammer nose.’ If it breaks, nothing short of replacing it will make the revolver fire.

Two steel J Frame revolvers are compared in this picture. The tip of the hammer nose circled in red has broken off. It will require replacement before the snub will be functional again. 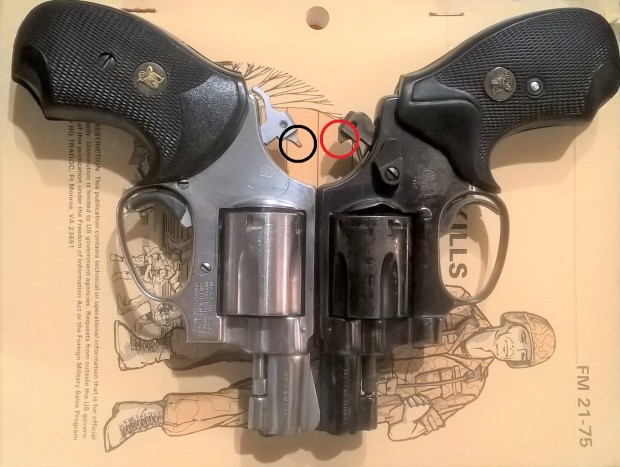 S&W changed the design of its revolvers before the Turn of the Century. The firing pin was moved to the frame from the hammer. But there are millions of older S&W revolvers that have the hammer nose design. Issues have arisen in the past because S&W has not manufactured the part in many years. They were available on the used part market but the supply was spotty. There are now two sources for newly manufactured J Frame hammer noses.

This part is best installed by a qualified gunsmith. It may require minor fitting. The hammer nose rivet that holds it in place may also need to be replaced.

The Model 36 with the broken hammer nose was manufactured sometime before 1975. It has been through considerable live fire and dry practice. When using an older gun, it’s a good idea to inspect them on a regular basis to see if any parts have broken. The hammer nose in particular will not cause an obvious change in function if it breaks but the gun will not fire.