By tacticalprofessor on April 4, 2014

“An ounce of prevention is worth a pound of cure.”

A few of the things I noticed yesterday morning on my walk:

1999, which has only had a For Sale sign up for about two weeks, no longer has the sign up and their vehicles are gone. There are several bags of trash out a day early, along with packing material, so they most likely have already sold it. One of the packing items left out with the trash was four unused mirror boxes. These will make good target backers for my next outdoor class, so I policed them up on my way home. That bit of information had a practical use.

They had trimmed back some of the foliage around the house and I noticed that there is a backyard pool. I had never seen that before. Checking backyards is good practice for rapid recognition because unlike the front area of the house, I only get a short glimpse and have to process the visual information quickly.

1977 had both of the SUVs gone, which is unusual. There was a young man walking out to the Mercedes, which is the third car usually parked there. He was slim, dark hair, wearing dark pants, a white shirt, and a skinny black tie. I’ve never seen him before, so that was interesting. On my way back, the Mercedes was gone and a gray Maza had just parked. Another young man got out and walked into the house. He was stockier than the other, dark hair, and wearing a gray sweatshirt.

There are a few houses in the neighborhood that I think of as ‘unusual.’ Nothing wrong with them but their patterns are out of the ordinary. One of them had a different car in the driveway today. All the vehicles that are usually parked there are brightly colored but this one was gray.

Atlanta Gas Light is building a gas transfer station at the end of the street. I like to keep track of what they’re doing. They don’t work on it every day. Whenever there aren’t workers, there is one vehicle sitting somewhere in the work area. I assume it’s an off duty police officer hired as site security. There are several different places they park, so I like to notice where they are and what kind of car they’re driving. When it’s dark, that can be a challenging exercise because they’re away from the street lights.

One of the houses has acquired a dog. It’s big and barked at me from the backyard on my first leg. It wasn’t barking on the way back so I assumed they had brought it in. However, I spied it along the back fence, interested in something on the other side of the property. Catching sight of it was one of those glimpses that I had to be prepared to see.

A man I hadn’t seen before was walking his dog. I always look to see if a dog is on a leash, which it was. He was about my height, curly hair, wearing slides, and when he spoke to the dog, did not sound like a native speaker of English.

I’ve been bitten by dogs before and don’t care to have that happen again. Whenever a dog on the street or in a front yard is acting aggressively, I get my pepper spray in hand. If an unsecured dog charges me, it’s going to get sprayed, unless it’s a rat dog. So awareness is not only an observational exercise, it is also tied to my DEFCON.

There are several houses near the other end of the loop that have numerous children’s toys and playsets in the front yard. One of the hou ses has a plastic ‘children playing’ figure intended for putting in the street to slow traffic down. I always look to see where they’ve stashed it because they put it in various places. The kids have some kind of foam dart launcher, so I look in the street for the darts that they sometimes miss.

Something I really like about my neighborhood is the flowering of the trees and bushes that starts in the Spring. Several species have already come and gone but others are just starting. I’m sure it’s Hell for the allergy sufferers but I really enjoy the view and look for which plants are flowering this time of year. In a week or two, it will be a riot of color for a couple of weeks. That will be really nice. 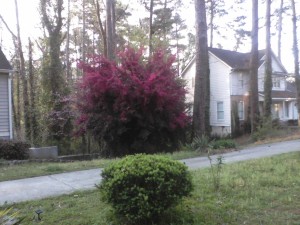 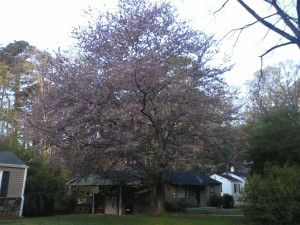 There were many more things I noticed, but I think you get the idea. This is a fun exercise for me and helps keep me in the habit of keeping my eyes moving and being in the moment.